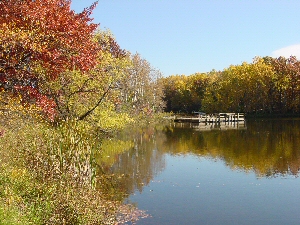 Eagan thinks of itself as a city of trees, but it is also a city of lakes, wetlands, and ponds. To continue to care for Eagan’s 1,278 water bodies, and to take corrective action on its largest lakes, is going to cost significantly more money.

The Environmental Protection Agency, in 2006 first classified two Eagan lakes as impaired for excessive phosphorus levels. Phosphorus causes algae to grow, and too much algae restricts the ability to use the lakes. Under the federal Clean Water Act, every two years states are required to submit a list of surface waters that are not meeting water quality standards and are “impaired.” Currently, there are more than 4,000 impaired lakes and river segments in Minnesota and newspaper headlines throughout the state about algae blooms and diminished fishing stocks are becoming ever more frequent.

“People should understand our water bodies are affected by things like parking lot drainage and individual lawn care practices,” says Eagan’s Water Resources Manager, Eric Macbeth.  “When debris and contaminants get into storm sewers,” he adds, “that degrades the quality of lakes our residents expect to enjoy. While we all contribute to the problem, the really good news is that we now know how to better protect what makes Eagan special.”

While the storm water utility fee increase this year is high, overall utility rates are historically low. Eagan ranked the second-lowest in 2015 for combined utility rates (Water, Sewer, and Storm drainage) of 29 metro area cities surveyed by Advanced Engineering and Environmental Services. Even with the rate hike, it will still be among the lowest overall.

“No one likes a rate increase,” says Eagan Mayor Mike Maguire. He cautions, however, that “If we wait to implement known solutions and measures that prevent pollution, it will be even more costly to address lake water quality issues later.”

+ - Impact on Residential and Business Utility Bills Click to collapse

Residents and businesses face the same percentage increase in the storm drainage fee. For businesses, however, the impact of the storm drainage fee increase is more variable depending on two factors, whether it generates a significant quantity of storm runoff and the size of its hard surface footprint. Even then, for 80% of businesses in Eagan, the impact of utility fee impacts will be $300 or less per quarter. Businesses with a significant amount of hard impervious surfaces—things like larger parking lots, large building footprints, and numerous sidewalks— can expect to pay more, as would a business that generates a significant quantity of storm runoff. The total utility bill is also affected by how much water is used.

Officials say it is important to remember two other factors. Once lakes are listed as impaired the responsible jurisdictions are required to formulate management plans to meet or exceed water quality standards. Before ever contemplating fee hikes, Eagan first utilized multiple grants totaling nearly $450,000. Since 2008, the City has worked with Minnesota’s Pollution Control Agency (MPCA) to develop improved identification, treatment, and prevention plans.

The strategies have worked, so much so that Fish Lake is now off of the impaired waters list, having achieved a 19% reduction in phosphorus. A neighborhood’s runoff into Schwanz Lake was reduced by 60% through the use of rainwater gardens which act as natural filters.
+ - Additional Lakes Impacted" Click to collapse


Unfortunately, as of 2014 four Eagan lakes are now included on the state’s Impaired Waters list for excessive phosphorus levels (Carlson, Fitz, Holz, and LeMay). Once the EPA finalizes the list, management plans will be required for those lakes too.

Eagan does not have creeks or streams to handle runoff, so it relies on a 221-mile storm drainage system that flows through many of Eagan’s lakes and wetlands. That intricate system, built up over the last 15 years, helps Eagan residents and businesses avoid the type of flooding that occurred back in 2000 in big rain events. More than 440 man-made storm basins also protect lakes and wetlands and handle runoff from parking lots. That coordinated system is paid for by the storm drainage utility rates we all pay.

Eagan residents expect to be able to swim, fish and boat. “It is part of our quality of life that attracts people to live and work here,” Mayor Maguire emphasizes. The City Council wants to be proactive, he says, about protecting those natural amenities for future generations.

Indeed, 96% of residents surveyed in 2014 rate Eagan’s quality of life as excellent or good. 89% of residents approve of its storm drainage. Yet, while approval ratings of lake water quality are 81% (up nine points from previous surveys), only 11% give Eagan’s lakes an excellent score.

When longtime Eagan resident Monica Foss was raising her children in the 1990s, the lake she frequented was host to a rich diversity of birds including coots, loons, cormorants, mergansers, buffleheads, wood ducks, swans, snow geese and blue herons. “Paradise flourished,” she said.

But as Eagan’s population grew over the last 25 years, the native landscape was replaced with homes, businesses and roads, and the residual effects of human technology (chemicals, phosphorus, etc.) placed stress on the natural environment. “A lake that was once clear and deep enough to be swimmable is now filled with cattails, and algae blooms,” Foss says.  Today mallards and Canada geese are the primary waterfowl living on the lake. “Few other birds stop, let alone live here,” Foss adds. “Protecting the quantity and quality of Eagan’s water resources is the right thing to do.”

In suburban lakes, it is unusual to be able to catch a fish within one mile of your home. Yet, because of Eagan’s efforts since 1990, fishing is possible at a dozen lakes already containing bass, crappies, northern pike, and sunfish.

“Eagan is among the leaders in the metro area for evaluating waters and taking preventative and restorative actions,” says Chris Zadak of the Minnesota Pollution Control Agency.
+ - Next Steps" Click to collapse


The increased funding, which would begin next year, is part of a $12.6 million program through 2020 to improve Eagan’s lake water quality and clarity.  It will enable one-time infrastructure improvements to significantly reduce runoff pollutants from getting into key lakes and will modify numerous existing ponds to hold water longer and maximize the ability to remove phosphorus and other pollutants through enhanced natural filtration.

“Even with the improvements,” says Eric Macbeth, Eagan’s Water Resources Manager, “we expect Eagan’s lakes will have plants and occasional algae blooms in the summer. This is normal. But our goal is to achieve longer periods of clear water, fewer algae blooms, and more sustainable plant life. Our data indicate some of Eagan’s lakes need to be put on a diet. Without additional measures, they won’t improve on their own, and likely will get worse,” Macbeth says.

Fitz and Holz lakes should come off the impaired list within the next five years because of continuing City efforts there, Macbeth predicts. Carlson and LeMay lakes, he says, will take longer and require more sustained work.

Upon approval of the annual budget, the new utility rate increases would take effect in the first quarter of 2016, which will be billed next spring.
+ - Questions?" Click to collapse


Do you have questions?